First aired in September 8, the Wisconsin Public Television put together a program “Wisconsin’s Homegrown Farmer” where our reentry urban agriculture initiative in South Madison was one of the three projects featured.

All of the three projects are great initiatives, with different emphasis. Fast forward to 9:56 time to watch ours. 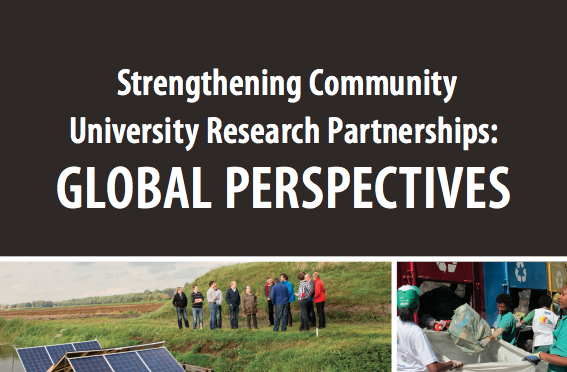 A new report on community-university research partnerships has been published by the United Nations Education, Scientific and Cultural Organization (UNESCO).  I have the privilege to work with my colleague UW-Madison Morgridge Center’s Beth Tryon and Loyola CURL’s Phyl Nyden on a chapter that features a critical analysis of practices in the United States.

The Strengthening Community University Research Partnerships: GLOBAL PERSPECTIVES report outlines a number of important practices in how research partnerships are conducted from the beginning to the end.  On their website, the UNESCO introduce the report as “a global study of institutional arrangements for the facilitation and support of research partnerships between Civil Society Organizations (CSO) and Higher Education Institutions (HEI).”

Environmental sustainability is a topic of discussion across the globe. But getting people to act collectively on environmental sustainability, especially in local communities, is fraught with challenges. Sociologically, the challenge is one of understanding how collective action works in order to mobilize community members around environmental issues. An important sociological aspect of mobilizing people for collective action is framing those issues effectively (see Benford and Snow, 2000). Frames are toolboxes of interpretation that help us make sense of the world. We have frames of not just what is right and wrong, but even about what does or does not exist. For example, people have various frames of what “sustainable” is. One person might interpret ethanol as sustainable, comparing it to fossil fuels, while another might interpret it as unsustainable based on an analysis of the energy required to grow and transform the corn into ethanol. Activists weigh into these controversies, attempting to bridge their frames with community members’ frames or transform community members’ frames to fit with the activists’ frames.

END_OF_DOCUMENT_TOKEN_TO_BE_REPLACED

This article was originally accesible from this link: http://goo.gl/hYaiA. However, for a reason that I am not aware of, it was taken down and therefore it has been unavailable. This article illustrates very well what and how popular education is playing its role in social change. I happened to make a PDF print out back then, so I am able to put it on a web page format for everyone to read.

John Hurst has been a professor of education at Berkeley since 1961. Besides his work in crafting undergraduate education and in popular education, he has played an important role in the evolution of the use of wilderness as an educational vehicle. He helped found and shape the Outward Bound movement in the United States and the National Outdoor Leadership School.

This article is also available in PDF.

When Rosa Parks was asked by the eminent talk show host, Studs Terkel, what the Highlander Research and Education Center had to do with the fact that she chose not to move to the back of the bus in Montgomery, Alabama, on that fateful day in early December 1955, she answered quite simply, “Everything.” As a result of its educational efforts on behalf of integration, the state of Tennessee closed Highlander in 1960 on bogus charges and auctioned off all of its property, only to have it reopen shortly thereafter under a new name and charter.